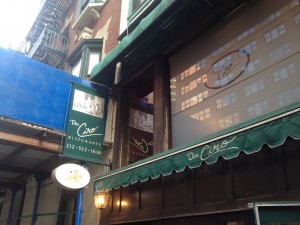 In an important worker rights decision, United States Magistrate Judge Ronald Ellis held that a worker at Da Ciro restaurant in New York did not have to return to New York from his home country of Ecuador to appear at a deposition or to appear in person for trial.   Rather, the employee was permitted to have his deposition taken remotely. Da Ciro restaurant argued that the worker’s lawsuit should be dismissed because he was unable to lawfully return to the United States because of his immigration status.  The court pointed out, however, that the restaurant was aware of the employee’s undocumented status and therefore his departure to Ecuador should not have come as a surprise.  Judge Ellis stated that Da Ciro should not be allowed to assert the employee’s immigration status as a defense to a FLSA claim, “particularly when the status was known at the time of employment.” The court noted in its decision that restaurant owner Ciro Verde admitted to violating the law by failing to pay overtime and spread of hours pay and “admitted to paying undocumented employees less, precisely because of their immigration status.”  Judge Ellis concluded:

The purpose of the FLSA is to prevent employers from benefitting from the illegal practice of underpaying employees or refusing to pay employees just compensation for earned wages.  Failing to enforce the FLSA because the employer raises the immigration status of his employee as a defense to compensation allows the employer to effectively be immunized from its duty under the statue to pay earned wages, and would thereby be able to undercut law-abiding employers who hired lawful workers, as those workers would not be disabled from vindicating their FLSA rights.

The workers in this case were represented by Louis Pechman, founder of waiterpay.com, along with attorneys Jessica Tischler and Ellie Mercado.