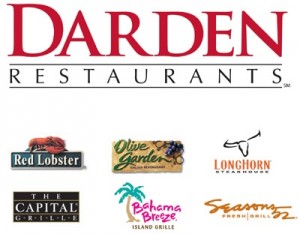 Darden Restaurants, Inc. and its subsidiaries have been sued in Florida for minimum wage, overtime, and other pay violations.  Darden owns approximately 1,900 restaurants across the United States, including The Capital Grille, Longhorn Steakhouse, Olive Garden and Red Lobster. In a Complaint filed in the Southern District of Florida, servers who worked at several Longhorn Steakhouse locations in Florida and at an Olive Garden in Georgia allege that the restaurants failed to pay their employees for all hours worked by forcing their workers to clock in and out after their shifts actually began and before their workday ended and failed to properly maintain accurate employee time records.  The workers also allege that restaurants failed to pay them overtime at the rate of one and one-half times their hourly rate of pay for all hours worked over forty.  In addition, the employees allege that the restaurants required their waitstaff to perform side work which exceeded twenty percent of their time at work and therefore were not entitled to pay their waiters and waitresses a “tipped” minimum wage below the regular minimum wage of $7.25 per hour. Lawyers for the workers also allege that similar pay violations occurred at different locations and brand restaurants centrally owned and operated by Darden and its subsidiaries throughout Florida and the United States.  Last year, Joseph Fitapelli of Fitapelli & Schaffer, LLP, Maimon Kirschenbaum of Joseph and Kirschenbaum LLP, and Louis Pechman of Berke-Weiss & Pechman LLP (and founder of waiterpay.com), filed a lawsuit on behalf of waiters at Capital Grille alleging similar violations.  That lawsuit is still pending in New York federal court.