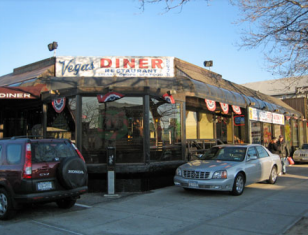 Former waitstaff at the Del Rio Diner and Vegas Diner claim in a lawsuit that the diners failed to pay them minimum wage, overtime pay and spread-of-hours pay. According to the lawsuit, waitstaff at both diners, including servers, line cooks, dishwashers, food preparers and hostesses, worked anywhere in a range of approximately 48 to 66 hours per week without receiving the full minimum wage or any overtime compensation. Additionally, the waitstaff claim the diners failed to pay any spread-of-hours premiums despite some employees working up to twenty hours in a single workday. The waitstaff allege that the diners paid them either a fixed weekly salary or an hourly rate, both of which resulted in rates under the minimum wage. For example, one of the waitstaff who worked as both a busser and server at the Del Rio Diner had his pay rate increase from $1.00 per hour to $2.50 per hour after working more than 20 years there. A server/hostess claims she was required to report that she made $5.00 per hour in tips regardless of how much she actually made so that after tax withholdings, her net wage payments were approximately $2.00 per hour.